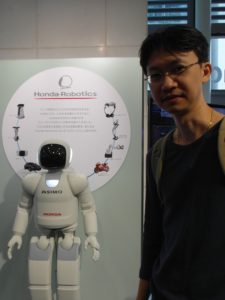 I am a computer science Assistant Professor in the Universiti Brunei Darussalam. Due to my exposure to both engineering and computing, I have interest in embedded systems, robotics, personal robots, cyber-physical systems, artificial intelligence, ambient intelligence and remote accessibility of these technologies. In general, my research interests are based around development of intelligent systems for personal robots and ambient intelligence. In particular, I am exploring the application of artificial intelligent techniques and info-communication technologies in developing intelligent systems.

I received the B.Eng. in Communication and Control Engineering from the University of Manchester, Institute of Science and Technology (UMIST) in 1997. During the course of my BEng., I completed a final year project on “Design of Air-Bridges in Slotlines” under the supervision of Prof Lionel E Davis.

My B.Eng study was under the Brunei Government Scholarship with the obligation to return to be a teacher.

With the bachelor degree, I joined the Jefri Bolkiah College of Engineering, JBCE (or Maktab Kejuruteraan Jefri Bolkiah, MKJB) as an Education Officer in 1998. I taught in the Department of Electrical & Electronic Engineering, which was later renamed as the Department of Electrical and Instrumentation Engineering. MKJB has now been absorbed into the new structure of the Institute of Brunei Technical Education (IBTE).

In MKJB, I taught courses in basic electrical principles, electronics and microprocessor. I met many good friends during the time in MKJB. In particular, Terry D Jayasuriya has greatly influenced my interest in working with students on interesting projects and participating in events and competitions. I had the pleasure to lead a number of student projects that won national competitions. In 2003, I started to work on the ABU ROBOCON project. It was the first time for Brunei to participate in the event. From then, myself and my good friend, Norjemee, were working on the ROBOCON project for the following few years.

During my MSc course, I completed a final individual project on “Gaze Contingent Robotic Control” under the supervision of Prof Guang Zhong Yang and Dr George Mylonas. George was then a PhD student in Prof Yang’s lab. George is now a faculty member in the Imperial College London.

After completion of my MSc, I returned to MKJB to continue with my position there. In 2007, I joined the Universiti Brunei Darussalam (UBD) as a lecturer. I was the Head of Electrical & Instrumentation Department when I left MKJB.

I have been a faculty member in the computer science program in UBD since then. In UBD, I continue my interest in robotics. I initiated the ABU ROBOCON project and started a robotic lab in 2008. In 2010, I went for my PhD study in the University of Tokyo.

I completed my Doctor of Engineering (D.Eng) on “Autonomous Human Action Recognition based on a Novel Incremental Approach of Clustering” under the supervision of Prof Takafumi Koseki. I had also have the opportunity to work with Prof Hideki Hashimoto and Prof Mihoko Niirsuma when I was in Japan. Prof Hashimoto has coined the concept of Intelligent Space, which has deeply influenced my research interest.

My D.Eng study was under the In-Service Training Scholarship from the Brunei Government.

I received my Doctor of Engineering from the Department of Electrical Engineering and Information Systems in the University of Tokyo in 2014. In Japan, the DEng is the equivalent of PhD.

I have been back in my academic job in UBD since 2014.

I can be reached at my email addresses: owh[at]ieee.org or weehong.ong[at]ubd.edu.bn.