The idea is to transform the coordinate frame from camera {C} to the torso joint of the first frame {B}. 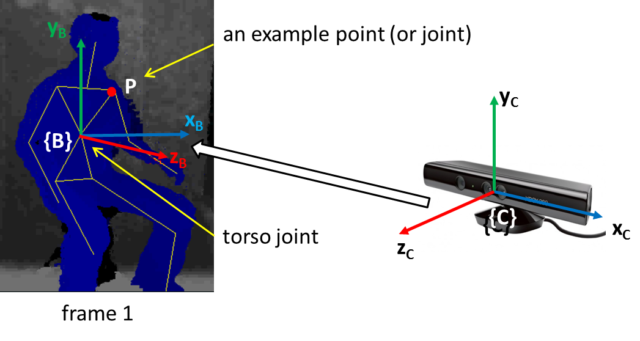 First obtain the following joint coordinates from the  first frame of an activity instance captured from Kinect (i.e. in {C} ).  Note I have chosen to define the body coordinate frame at the torso joint in first frame.

Second, form the transformation matrix (in homogeneous form, i.e. 4×4) to translate the origin from {B} to the origin of {C}.  Here’s we use the position of the torso joint. Note the translation is the reverse of the torso joint vector. This translation effectively moves the position of {B} to {C}. Imagine moving the person in the image above to the center of the Kinect.

Third, obtain the unit vectors of the x-axes of two reference frames from the vectors of the left and right shoulder joints. For {B}, we assume the x-axis is along the shoulder pointing to the left of the person. Unit vector is computed from the difference between the two shoulder vectors normalized to unit length. For {C}, it is simply a unit length vector pointing in x-axis of {C}.

Forth, compute the rotation angle

into the orientation of

Fifth, form the homogeneous transformation matrix for rotation that would rotate

into the orientation of

Finally, given a point P whose coordinates in {C} is given by

Pad the vector and compute its coordinates in {B} ,

First, I note the coordinate frame of Kinect is right handed .  (NOTE:  I can’t confirm this info.  Microsoft document says it is right handed, however my system with SimpleOpenni is left handed, i.e. x value increases toward right of sensor.  Anyway, the following discussion remains valid.  Only that if it was left handed, then the resulting local coordinate system will also be left handed.  I also note OpenNI called our left as right and vice versa, i.e. our right hand is the left hand in OpenNI.)   The origin is right at the center of its face.  z-axis increases when moving away from the face; y-axis increases upward; x-axis increases to its left (viewer’s right).  Lets call this camera coordinate frame {C} . 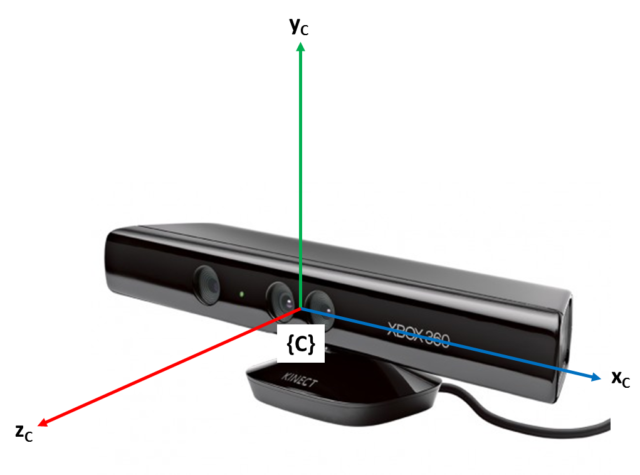 I want to define a body coordinate frame, lets call it {B} , on the detected human skeleton from Kinect API.  I decided to place {B} at the torso joint of the first frame of an activity instance.   Alternatively, I could have place {B} at the torso joint of each frame.  By doing so, I would need to compute the transformation matrix in each frame and the location of the person would appear stationary; I would require additional feature to capture the movement with respect to the world.  Note that an activity instance comprises series of frames of posture. 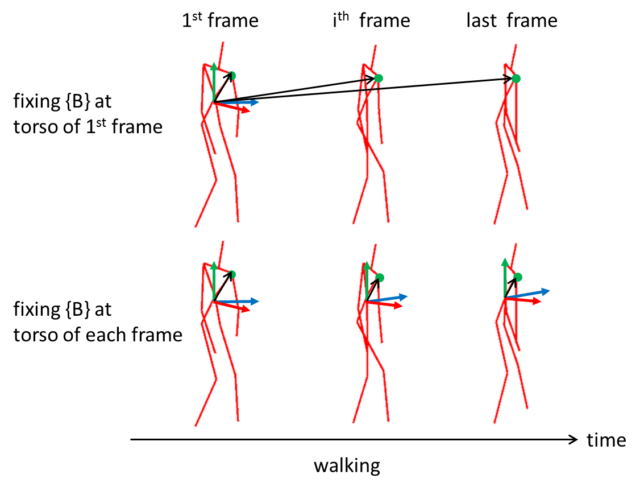 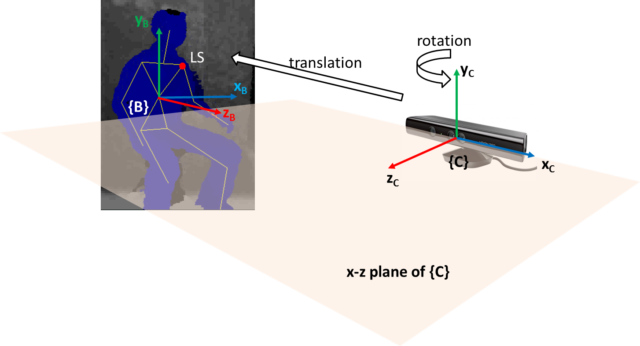 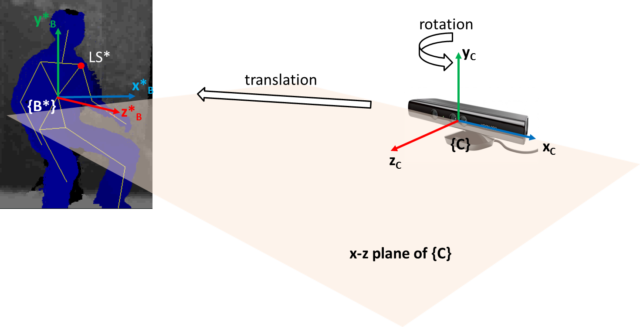 (these are the vectors from the origin of the reference frame to the point LS and LS* respectively), for example, are the same.  In this way, the coordinates are view-invariant and we can better recognise similar postures.  In equations below, superscript is used to indicate the reference coordinate frame.

To transform the coordinates of a point in {C} ,

, we need to determine the  homogeneous transformation matrix ,

is the required transformation to move {B} such that it aligns with {C} .  Note when labeling axes and components, I have used superscripts, e.g.

is the x-component of vector 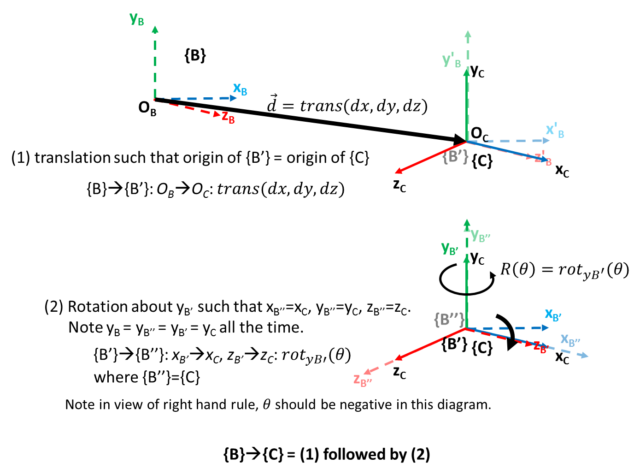 Note that, the sequence of operations can be reversed, i.e. rotation first then translation.  In both ways, we should obtain the same

, however the order of composing

must be second operation multiply by first (2)*(1). Further, if we do the rotation first, we would be rotating around the y-axis of  {C} since we are using the coordinates from {C}.  This would not give the desired effect to align the body’s front to z-axis.  I will do translation followed by rotation.

is simply the reverse of the torso joint vector

The translation can be expressed in homogeneous form,

After the translation, the origin of {B} and {C} are aligned (y-axes are aligned).  However, a rotation is required to align the other two axes.  The rotation matrix around y-axis to move the x and z-axes (considered as vectors in this movement) in { B' } to align with corresponding axes in { C } (i.e. such that  { B'' }={ C } ) is given by:

The following diagram shows the necessary vectors to determine

.  I basically use the vector connecting left and right shoulder joints to determine the direction of x-axis in   { B' } (

) and then use dot product to computer the angle

are unit vectors in the direction of

axes respectively.  The value of

can be determined using dot product and the criteria that

are unit length, and

with reference to {C} , we have

Note the use of cosine makes the sign of

irrelevant.  However, the sign will be needed eventually when computing the sines.  To determine

are vectors from origin to LS and RS respectively).  Further, when parallel to x-z plane, the y-component is made zero.

, I use the cross product of

.  Note right handed rule being applied to determine positive direction, as well as the resultant vector of cross product.

From the above diagram, if the result of the cross product is in the direction of y-axis,

.  Note also the x and z components of the cross-product are expected to be zero (since it is along y-axis).

The resultant vector will be 4×1 and the padded 4th element can be removed to obtain a 3×1 vector (just the x, y and z components).  Note all coordinates are reference to {C}.

Here’s the Octave implementation for the transformation, including codes to transform all examples (instances) in a given file.

I found the note on homogeneous transform by  Jennifer Kay from Rowan University being most readable for novice like myself.  Jennifer uses good number of illustrations and simple examples to explain the concepts of coordinate transformation and its application in forward kinematic in robotic arm.  There are a number of things I found difficult to grasp when reading her note, here are a few:

Jennifer’s note is based on the tutorial ” Essential Kinematics for Autonomous Vehicles ” (this is later version) by Alonzo Kelly  from CMU, which I found Jennifer has done an excellent job to explain clearly.  To probe further on how homogeneous transformation matrix is derived, I found the note  on Kown3D  quite easy to digest.

Kown3D also explains the  difference between rotating axis (coordinate frame rotation) and rotating a vector (no change to coordinate frame) , which is an important concept to grasp to under the concept of transformation.

Still, I haven’t fully understand everything explained.  One the problem was my lack of understanding or intuition of dot production and vectors.  The videos on Khan Academy  explain some of these concepts well.

TODO**: Instructions on how to use.